Preview: The Ricky Gervais Guide to Law and Order

The seventh in a new series of all-encompassing excursions. Join Ricky Gervais, Steve Merchant, and Karl Pilkington as they ruminate on all aspects of law and order. Justice and morality get a look in, with criminality galore. Ricky tells tales of gold bullion, London villains and an L.A. cop. Steve discloses a past transgression, and Karl has a stab at hostage negotiation. In this episode: Karl's great escape; Capital punishment - an exhaustive debate; Karl's confectionery confession; Steve invites trouble on the tube; Ricky discovers a useful guide to the 10 commandments; Steve's anti-mugging strategy; Ricky's bullion robbery and Karl's daylight robbery; The Bodyguard, followed by The Negotiator. 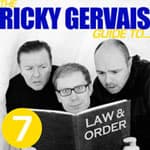 The Ricky Gervais Guide to Law and Order