Preview: The Ricky Gervais Guide to The Human Body 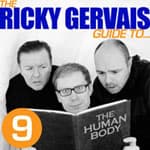 The Ricky Gervais Guide to The Human Body