Here's the first in a new series of in-depth discussions on a variety of subjects relating to humanity's greatest endeavors. Around the table, Ricky Gervais, Steve Merchant, and the glabrous luminary Karl Pilkington. In this episode, MEDICINE, we explore the treatment of human ailments through history - from trepanation (or 'oles in the 'ed) in early tribal societies right through to the possible, if improbable, future of medical technology. Ricky Steve and Karl offer a uniquely ill-informed appraisal, from medicine's superstitious roots in shamanism, the beginnings of empiricism and on to today's holistic ideal. Areas of discussion include the dangers of leaving yoghurt pots in fridges; how over-enthusiastic janitors can stifle scientific progress; how hygiene impacts on immunity; Karl's ideas on empathic diagnosis; fruit-based contraception; the risks of eye surgery; the politics of treating obesity; conjugal care-workers; geriatric clinical trials; Karl's take on palliative care; and the inevitable anal-probing.... 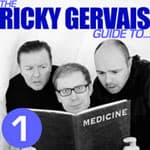 The Ricky Gervais Guide to Medicine