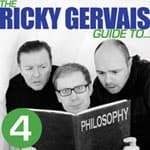 The Ricky Gervais Guide to Philosophy