Preview: The Ricky Gervais Guide to The Earth

The tenth and final episode in this series considers our planet in all its awsome magnificence. Join Ricky Gervais and Steve Merchant and Karl Pilkington for a final verbal jaunt around the world. In this episode… A preamble on Earthly nomenclature; Steve laments inclement weather; Karl does Genesis; A load of old Morlocks; Aunty Nora's insulated isolation fears; Karl talks shit; Industrial relations masterclass; Sofa salvage; Karl makes the bed; Karl up to his elbows; A dip with a dolphin; War on terrapins; Karl's new project; Karl and the Cairo khazi. 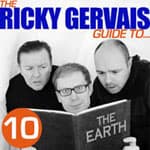 The Ricky Gervais Guide to The Earth