This is the second in a new series of definitive discourses exploring the diversity of human enterprise. As always, Ricky Gervais and Steve Merchant are joined by shaven simian Karl Pilkington. In this episode, NATURAL HISTORY, we explore the awesome beauty inherent in the natural world. Drawing on observations by eminent biologists, from Thomas Huxley to Charles Darwin to Richard Dawkins, Ricky Steve and Karl offer their usual benighted summation. Areas of discussion include: The heuristic potential of flora and fauna; Karl is impressed by a new motoring accessory; Seashores to semiconductors; Gene genius; Monkey thumping; Karl's instinct for extinction; Self-improvement a la Frankenstein; Dodos - a dead delicacy?; Aurally challenged alligators, hedonistic rodents and horse-biting ranidae; Genital aesthetics - Karl talks bollocks. 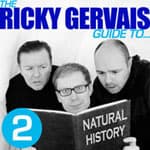